Of Sin and Swine (almost)

A few weeks ago, my wife Diana (www.dianabusse.com) was walking our dog Tuxedo late at night, and two 50 kilo, pig-like creatures called javelinas popped their snouts above a drainage embankment that was a cozy distance away.  Shocked, she asked for divine intervention and received guidance:  appear as to be as tall as possible and scream into their "faces." These tactics worked enough to startle the faux-pigs, and so she and doggie made a hasty retreat (partially on all fours) up a neighbor’s stairs.  As we later found out, the javelina is averse to climbing.
It was Diana's first encounter with the creature.  But we had heard grisly anecdotes that they loved killing dogs, as they judged them to be coyotes, which are a main predator. When I first came to Arizona last year, I knew the javelina not.  Within a month I was driving back to work after lunch and I spied them in the parking lot. I immediately judged them to be wild boar of some sort, and from my youthful experience living in The Philippines, I knew to avoid them.  So I parked in a different area, on the other side of the building.  I then asked someone if there were wild pigs in Arizona, and was told about the pig that is not really a pig. Here's what the State of Arizona has to say about them.
http://www.azgfd.gov/h_f/game_javelina.shtml
I told Diana that they were as “ugly as sin.”  “No, they’re just sin” she replied.
I was reminded of one of Jesus’ miracles (Mark 5: 1-20) where he casts demons (at their request) into pigs  and the herd then jumps off a cliff.
I talked to a priest who said “man, they are dumb...and ugly.  They’re so dumb.”
I’m not so sure about the “dumb.”  They've marched here from South America over the last few thousand years, and have survived in both the jungle and the desert.  Their next milestone is Las Vegas, which seems appropriate.


I inquired with the lead butcher at Whole Foods, who said that they couldn't be domesticated.  I believe "unpredictable" was the adjective he applied to their behavior. "They're closer to rats than pigs" he added. I reported back to Diana that they were giant rats. "Ewwwww!" she retorted.
I propose an eschatology stipulating that The Tribulation starts with javelinas replacing us as the lead politicians.  I envision them mounting the steps of our neo-classical halls of government and snort-speaking thusly:


"Our name is Legion, for we are many."
What would St. Francis of Assisi say? 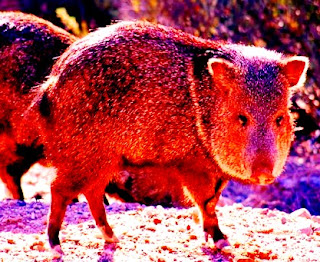 Posted by Tom Hamill at 5:16 AM No comments: